Well, another week has gone by and my migration to Fibery has temporarily stalled. I made great progress in moving over my tasks in particular, right up until last Sunday, and then I just didn’t get back to it this entire past week. Amazing Marvin is familiar and working “OK”, and meanwhile I was fairly busy, and also experiencing some intermittent moments of real polarization between parts of me, resulting in some strong procrastination at times (see below for a bit more on that). The Fibery migration came to mind several times, but I never felt like I had the time, space, or energy to deal with it. It feels like what I need to do is at least complete the migration of one key area of data/workflow (Amazing Marvin continues to feel like the most viable candidate for that, for a number of reasons). So that will be my focus when I return to this. I’m going camping this coming week (as long as the smoke from nearby fires doesn’t get too bad!

), so I doubt I’ll have time to do it this week, sadly. But maybe this coming weekend…

I finally finished my playlists for a couple of friends and sent them over. I figured why not share one here, so take a listen, see what you think. Might find some new gems in here: 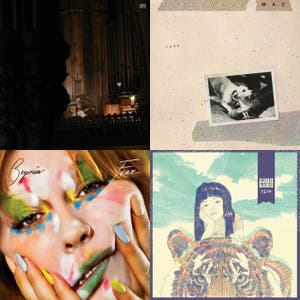 It’s been a pretty good week in my dating life. Most of the time, whether I actually go on a date with someone or not, the chatting leading up to it is just, well… “OK”. But I had a great initial connection with someone on Hinge, where the conversation really felt fun and interesting, which is far too rare in my experience. Anyway that ended up translating into a promising first date, so that’s exciting.

A friend of mine asked me to be one of her “bridesmaids”. I offered to wear a dress, but apparently I’ll just be in a tweed suit. Oh well, missed opportunity to show off my calves

but what are you gonna do?

Still it’s very nice to be a part of their special day (in more ways than one!).

I finally figured out some travel plans. I had wanted to go on a longer road trip, out to Colorado maybe, or up to Washington state to check out more of their spectacular mountains. But it felt like too much at the moment and so, still wanting to get some nature time, I remembered I had wanted to explore Sonora Pass (Hwy 108) more, and I had even previously put together a list of interesting hikes in the area. There were plenty of mid-week reservable campsites in Pinecrest and Lake Alpine, so I got 3 nights and I’m looking forward to getting some high Sierra time again! It’s been a while, and that kind of landscape is one of my favorites to explore, with granite peaks, clear, cold rivers and creeks, and gorgeous meadows. Also it’ll be a great opportunity to test out some new backpacking-oriented gear I got recently, in anticipation of returning to multi-day trekking some time soon (it’s been 10-15 years!).

It was actually a pretty good week as far as getting things done, but I also had some really strong moments of what I’ve been calling “deadlock” (for lack of a better term - tell me if you have ideas!). This is, I think, when two or more parts of me have really strong, differing desires and needs around what I should be doing in a given moment, and so I end up doing… almost nothing. Oddly this often comes with a persistent desire to go on Facebook, despite the fact that it has had minimal use in my friend group for at least 6 months. I used to go on there and see 20+ notifications every day, but now I see maybe 1-2, and often not even from people I know (e.g. Groups activity, etc.). I scroll the feed and sometimes see something amusing or cute, but… it’s definitely not actually satisfying to whatever part is wanting me to do this. So I think it’s pointing me in the direction of an underlying desire that Facebook sort of represents, perhaps for a “break”, for recreation, downtime, relaxation, or perhaps for human connection, even validation…

I’m still trying to understand what’s going on, and the different parts involved, and it’s a bit frustrating to have it come up multiple times. But it’s a good opportunity to get to know those parts, and I’m also glad at least that I’m still able to get a good amount of “necessary” stuff done even while this delays me a few days in a week. It has also inspired me to try more “self therapy” sessions. With therapy I think very often we’re intended to do some kind of “self work” in-between sessions, otherwise therapy is less effective, but the exact form that takes is often unclear in my experience, and tends to be fairly informal. So I’ve been experimenting with making this an even more explicit and deliberate practice, once or twice a week actually pausing what I’m doing and just talking myself through some feelings for 10-20 minutes and recording it for later reference if needed. It’s something I’ve done informally for most of my life, but now in the frame of IFS, and with a better (and growing) awareness and understanding of my different parts, I think it’s proving more effective and insightful than ever.

I’ve been looking for a “read it later” app for a while, and recently mentioned that I started testing the Readwise Reader beta. One of my primary reasons for picking it is the great interoperability and large number of integrations they have created “natively” (i.e. the company itself created and maintains them). The importance of that remains high for me, but there are other options that are further along or more full-featured in various respects, particularly e.g. PDF annotation, and one of those is Mindstone. And their CEO reached out to me recently for a brief feedback session to understand why I hadn’t opted to use their tool (analytics shows their churned users, of course). I had first tested it more than a year ago, and didn’t see a ton of progress recently when I took another quick look before settling on Readwise, so that was part of my feedback (as a returning user, let me know what I’ve missed in your updates!). But the import/export (and especially the export/sync) was really my biggest concern with it, and it’s otherwise a pretty nice reader and annotation tool worth checking out. Kudos to Mindstone for spending the time to get some direct feedback from non-customers!

I recently discovered that I had a bunch of Twitter message requests unanswered for like the last 6+ months. Basically the amount of time I have been sort of taking a break from Twitter, which makes lots of sense.

Anyway, most weren’t that interesting (a majority were bordering on spam), but a couple I do wish I had been able to respond to sooner. Several people reached out asking for advice, or input on something, and that’s the kind of thing I do tend to find rewarding. So I may still respond to one or two. But I’m still not on Twitter regularly, so if you want to get in touch: don’t DM me on Twitter

You can email me, or message me here (you can login with Twitter!), or whatever, but yeah, Twitter DMs will probably continue to be slow to get a response.

I mentioned my new “accountability buddy” practice with my friend recently, and we had our second check-in yesterday, a bit later than planned, but it was still really good. I continue to find it an extremely useful practice, with my own accountability to self really being the biggest “accountability” factor, but most of the value coming from having someone to talk through the challenges of the week, and set some basic goals for the coming one. This time we both wanted to try some Time Blocking, so while previously our goals were fairly different, it will be all the more interesting to compare notes on our respective approaches to and feelings on the Time Blocking model. I have long felt it could be helpful for me, but have resisted actually trying it. Our accountability practice has a lightness and experimental quality to it that I think is going to help me test things like that with less resistance, so that’s exciting.

My long odyssey to decorating my house (with art/prints in particular) continues. I have some nice metal prints now, but when I tried to hang them, my plaster+metal-backed walls did not take kindly to a nail. So I was left with a shallow hole that couldn’t hold anything, and my prints continue to lounge shiftlessly about in my space, reclining against a wall, resting on a sofa, hiding in a closet… I hadn’t yet figured out a solution to this, when I realized: wait a minute, I have picture hanging rails! This house is not a Victorian, but it was built nearly a century ago, and does still maintain some old-school details, vaulted ceilings, wainscoting in some rooms, and yes, a ledge that goes around the edge of most of the rooms. It appears to be a bit more shallow than many of the picture ledge hardware sets I found, so it may not have been designed for that purpose (unclear), but I’m hopeful that I was able to get one that will work. I’ll know when I get back from camping! I don’t love the idea of wires hanging down, but hey, at this point I’d welcome anything that lets me hang these prints up finally. I can figure out something better later! If it works out, pics to come.