Another weekly journal update, but first a little meta for a moment. I go back and forth on what the purpose of these regular posts is or should be. Sometimes I feel like I should focus on the bigger things happening in life, the new and notable, and perhaps elaborate more on those things in particular. Other times I think that part of the value here could be in the mundane but candid life moments and little progress and setbacks. Part of what I have enjoyed in seeing some other people’s open and personal writing is the very small, relatable things, the little successes, the minor failures and setbacks… And perhaps I can and should just include both. That then gets me to considering how I should format it, or if I should worry about consistency at all (in the formatting I mean). Anyway, I don’t have any good answers, but I’ll keep experimenting…

I have an ongoing struggle with getting consistent exercise, and stretching, keeping my body flexible and comfortable. I’m not by any means in bad shape, and I do exercise, it’s just intermittent, inconsistent (in terms of what I do), etc. And I have my aches and pains, most come and go, but some are certainly more frequent than I’d like. So I always wonder, when I’m not doing something (like yoga), how much better off would I be if I were. And then sometimes when I start experimenting with a practice, most recently a stretch called “Wall Angels” for example, I may actually feel some new aches and pains (or old ones flaring up). Is it related to the new thing I’m doing, or just coincidence? And if it’s related, should I push through, will it get better, is it bad form, etc? Most of these questions have some kind of answers, and most involve asking someone who knows better than I do. But… I am reluctant to do that, for a number of reasons, almost none of which are truly rational.

Maybe I’ll elaborate on that some time… For now I keep trying, and hope I can take 2 steps forward for every 1 back…

I am a long-time #tea drinker and over the years have gotten more and more deeply into it. One thing I surprisingly haven’t really experimented with yet though is cold brewing my tea, and it turns out it’s great! I am a particular fan of green tea, and one of the minor tricky things with it that you want to brew it at the right temperature or you can get unwanted bitterness or other flavor issues. I have a great kettle at home that handles this well, but when I’m traveling it can be trickier to get truly right. But it turns out just putting some leaves in a jar, filling it up with water, and leaving it in the fridge for 8-12hrs brews excellent tea most of the time, and you can even reheat it for a good result in most cases! This takes a lot of the trickiness out of brewing tea well, and it even seems to make the leaves go further. Bonus! Now I’m still brewing a lot of my tea hot, I’m used to it, old habits die hard, etc. But there are some teas I think I’ll gradually move to primarily cold brewing in the future, particularly the more delicate Japanese green teas… Anyway, if you haven’t tried this yourself yet and you’re into loose leaf tea, give it a shot!

I finished watching the Obi-wan Kenobi TV show and I have… mixed feelings. No regrets watching it, and the final episode had some good stuff in it, but a lot of head scratchers too. I just don’t understand why they leave so many glaring plot holes in there. It’s not like they had to write it the way they did, they just… chose to. Anyway, it was better than Boba Fett at least.

A while back I decided to do a 6 week experiment to try to get to a target weight, which I’ve talked about a bit before. Now at the end of that experiment, I can say it was mostly unsuccessful in its raw goal, but I certainly learned some stuff, and did end up getting to a new weight low, albeit by a much smaller amount than I’d planned. My next experiment will be much shorter in duration (2-3 weeks) and more intensive, to once again see if I can hit this goal (or closer to it) with some more concerted effort. But… still safe and healthy of course.

Something I have long struggled with in life is time management. In recent weeks my coaching has started to really focus on this, and I think we’re coming up with an approach which may help a lot. Relatedly, but separately, I have been trying to set major goals for myself every half-year for a while now. But I ultimately I seldom checked-in on my goals. Interestingly I often made decent progress on those goals anyway, and when I would check-in on the half-year to make my new set of goals, I’d find that I could check off a good number of them to at least some degree. The same is true of my most recent set from the first half of 2022. And meanwhile I make a lot of interesting progress in other areas, projects, etc. too. But my real hope is to set these broader, intentional goals and allocate time to actually, consistently make progress on them. So in the interest of that, I’m moving to quarterly goals, and working on this time management area with my coach, and things look promising. It’s all a big experiment anyway…

My mom and I share a love of and fascination with plants, and these days with her living only an hour or so away from me I get to see her more frequently. But she seldom makes it down my way from up in Sonoma County. But this past week we made a plan to go to the UC Berkeley Botanical Gardens together, and it was an amazing experience! In truth I had been several times before and honestly had kind of mediocre memories of it, but whether it was because it had been so long this time, or that I’ve gotten even more into plants (and plant families, etc.) since my last visit, I really enjoyed this visit in particular. Absolutely spectacular, and for being well past spring, there were a surprising number of things in bloom! I kind of can’t wait to go back, and may even get a membership again (when I had one years back I barely used it, sad to say).

A friend of mine sent me an Instagram food trick video where someone made a “sky and clouds” drink of some kind, and although I will often add that kind of thing to an ever-lengthening list of things I want to try out, this time I decided to just go for it. It helped that I had some potential ingredients (e.g. marshmallow fluff) on hand. My first attempt was not perfect, but for an ad-hoc test it’s not bad! 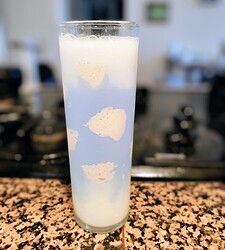 I’ve been kind of bad at decorating my living spaces for most of my life. Hold on, I will say, I’ve been good at collecting and sometimes adequately displaying interesting and unusual things that speak of my personality. But that’s not quiiite the same kind of decorating I mean (although there’s overlap). Anyway, I got a new sofa a while ago, started installing some shelves for my bitters, and have made some other progress, but after over 4 years in my current house I still don’t have photos on the walls, that’s the gist.

But hey, I took a step toward fixing that recently! I ordered some sample metal prints from Bay Photo to get a sense of the finishes they offer, and next I “just” need to pick the ones I want actually printed full-size. I say “just” in quotes because, well… I’m indecisive about what to put on my wall. But it feels tantalizingly close! I also ordered some throw pillows, so… it’s all coming together.

As you might recall, I’ve spent a lot of time over the past few years getting photos and video of caterpillars growing and turning into butterflies. I have wanted to organize it all so I could make it available to anyone who might benefit from it, but it has been a rather daunting task, which I’ve taken in tiny pieces here and there. The last couple weekends I’ve decided to spend a bigger chunk of time dedicated to this work and, while it’s still taking longer than I expected and hoped, I have definitely made a lot of progress now. One more big push and I think I’ll have it all named, organized, edited, and uploadable, and can finally share it wherever I want! In part I’ll be putting stuff on YouTube, but I also plan to replace the messy mish-mosh of 1000s of images and videos I put on Flickr with a much more organized and uniformly high quality set of more usable stuff. Stay tuned!

In my home bartending ambitions, one aspect I enjoy but pay less attention to is glassware. I used to visit a lot more estate sales pre-pandemic, but what I realized is very few of them actually have unique, interesting stuff that’s new-to-me. It turns out that a lot of people buy the almost-exact-same stuff that’s of mediocre quality and largely uninteresting. These days estate sales often post whole galleries of their contents online though, so I can often spot potentially interesting items without even going out to look. And that happened this past week, with an estate sale that was only 10 mins away! They happened to have quite a number of cool sets, so I bought 3, some fancy wine glasses, single rocks glass, and a cute little pastel tea cup set with saucers, all of which I plan to use for cocktailing at some point. Maybe they’ll show up on my Instagram at some point (with booze in them, obviously)!