I negotiated a work-trade in exchange for some tech consulting recently, but it was left a bit open-ended what that tech work might be. So I’ve been discussing the various tech needs of this business with them, and one of the biggest areas that came up is their plans to get a new website created. It turns out they’ve been working with someone who claimed they were putting something together, but it has now been some 6 months since then, they’ve paid out $1000s of dollars, and there was little to show for it. Finally they got a draft of the new design, and were concerned that it needed a lot of work, so they shared it with me for my opinion.

I’ve been a Wordpress admin for years, across numerous sites including my own, and I know how to track down what resources, themes, plugins, etc. are in use pretty easily. So within 15 minutes I discovered the theme the guy they were working with had used, and could see just how incredibly little he had even changed from the defaults of the $50 stock template. It was kind of heartbreaking to hear how much they’d spent on this already, but it clearly didn’t make sense for them to continue working with him. So I advised them to cut ties, and may end up working on it myself or recommending someone else to do the work. For now the most important thing is just for them to stop bleeding money to get virtually nothing in return.

This experience, and others less overtly concerning (but still speaking of the difficulty the average business owner has navigating a complex tech landscape) have me thinking lately that there is a real need for a sort of high-level solutions evaluator/recommendation service, affordable (or even free) to small businesses. So I’m starting to think about how I might make that happen…

I finally got my new sofa! And I really do love the color I chose. It’s bright and fun but not too loud or attention-grabbing. It’s perfect. Now I just need to wear it in a bit, and keep my cat’s hair from making it look messy constantly (you can see below why her hair color might be a bit of a problem

). Some kind of cover maybe… 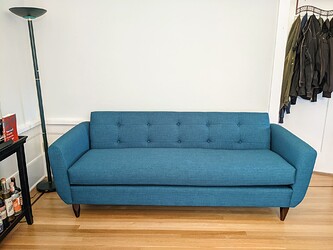 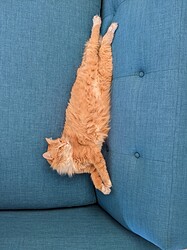 As I continue my IFS therapy work, I am finding more and more parts-related insights each week. And it seems I can feel my connection with “Self”, and my compassion for all the parts in my system, growing as well. I had an interesting and wonderful experience this week, in particular, where I just had a moment of spontaneously embracing myself and feeling a very clear self-compassion. A love for and understanding of some of my parts that had perhaps felt unappreciated or unloved. It’s a simple thing, and an act that I think gets some cultural derision at times (what do you picture when you think of someone hugging themselves?), but self love, even (or perhaps especially?) expressed physically (no, not that kind of self love

) is a really beautiful thing. How you touch yourself seems to matter, how you treat your body, what emotions are behind the way you relate to yourself physically… Anyway, it’s a fascinating thing to explore and experience.

I had a ton of fun this past week jumping into experimentation with non-alcoholic “cocktails”. This was inspired by a new friend who doesn’t drink much, and since making drinks and sharing interesting flavors is one of my favorite things, I just had to come up with another way to make that work. I’ve been meaning to do N/A experiments for a while anyway, so this was great motivation. And it turns out it’s actually really fun, and to some degree can be rather easy, at least to get something that tastes good. It may not taste exactly like a cocktail, but good-tasting is a start! The actual mouth feel of alcohol is quite hard to replicate, and even common spirits like gin don’t really have excellent non-alcoholic counterparts yet, in my experience. But even without that the results are plenty enjoyable, and I’m looking forward to sharing these with people, whether they like alcohol or not! And as a non-trivial side bonus it has me drinking less alcohol too, which is no doubt of some benefit to my health (although I don’t drink excessively as it is, fortunately).

I decided to go for it and buy a Macbook Pro I lucked-into at a really good price. I’m a Windows guy, but Apple is doing a lot of things right lately, and I’ve realized I have to at least give it a try and see if I still, well… hate MacOS.

At least the price of good hardware has come down, relatively speaking. It’s not that Apple is selling budget machines now, it’s just that with the M1 a Macbook Pro or even Air at $1100 can put up some remarkably good performance vs. Windows laptops. So here goes the adventure, and let’s see what happens…

I’ve had a Flickr Pro account for quite some time now, and mainly I use it for photo backup, not for public album sharing. But I’ve long meant to actually put up some public albums, just so more of my work is out there. I kept telling myself I wanted to have my best work picked out, or to have gone through newer albums, or whatever. But all of this was needlessly holding me back. In fact I’d already picked out at least some subset of my better photos each time I uploaded an album and shared it on Facebook, and as Facebook has become an increasingly awful place to manage photos (the semi-recent redesign really borked a lot of things that used to work just fine), I finally decided to just take the albums I had on Facebook and use them as a guide for what to upload, for now, to Flickr. But I plan to keep adding new albums as I finishing sorting and editing them in the future. I prefer the album view to the “photostream”, so you know what you’re looking at. More recent stuff will come soon…

I started using Notion again more seriously recently, after realizing that it is probably the best free, collaborative space I can instantly share with someone to start working on a project. I can’t do that in Quip without paying, I can’t do it in Obsidian, and I can’t do it in Fibery (again, without paying). A year or two ago I put in serious effort to begin migrating all my notes over to it. But despite loving Notion when I first discovered it, I later became disillusioned, and ended up sticking mostly with Quip, until I eventually found Obsidian. But even now, despite being a big fan of Obsidian and using it daily for many of my notes, I still keep a lot of stuff in Quip.

In part it’s just that there are genuine issues with Notion, and I see a lot of other up-and-coming tools (like Anytype) that aim to do what Notion does, but without some of those issues, or better yet, accomplishing similar goals but in better, more flexible, powerful ways. So I’m hesitant to commit to Notion when I may have to redo all that work in some relatively near future. But it’s seeming increasingly likely that Notion import will be an option for some decent subset of tools, at the least through Markdown, and hopefully database import through CSV also becomes functional. And in the meantime it’s a great collaborative platform, it must be said.

Though… I do still find some unexplained “friction” in using it, even vs. Quip, and I’m still trying to figure that one out. It seems important for long-term adoption and satisfaction. Do you find Notion somehow a little clunky to use, despite its slick, block-based editing?

One of the great questions in my life for many years has been whether I want to have kids. Nevermind whether I will, whether I’ll find someone who also wants to, the timing will be right, etc, etc. I just want at least to be clear about what I want, if I could simply choose. Obviously a great deal depends on context, but many people I know seem at least to have known what they wanted, what they were aiming for in that regard. I still don’t, but I think about it fairly often.

Recently I saw a new “1 second a day” video a friend shared showing the past year of his kid’s life, 1 second at a time. He’d shared a similar video last year, and I had a similar reaction: many emotions! Strong emotions. Hard to parse, even. But it’s definitely bittersweet. There is simultaneously a recognition of how utterly children change your life and how much a part of me doesn’t want that, and yet a longing (from another part or parts of me) for so many of those moments, those connections, that chance to get to know and help to shape a whole new person, to be surprised by them, to share surprises and wonder with them, all of that. An awareness that it changes your life forever, and you can’t have both, you can’t have those unique experiences, and live an independent, self-directed life, at least not in the way I do now. Much of life is like that, really, but seldom to me is it more obvious than in the choice of whether to have kids.

I remain, sadly, ambivalent, uncertain. But it continues to be notable and interesting to me the strong emotions these videos - and other artifacts of my child-having friends - sometimes inspire for me.