A friend of mine is navigating some experimentation in the world of polyamory, driven more by a rejection of some of the clearly negative aspects of societal norms and expectations around relationships, gender norms, etc. than around a particular interest in having multiple partners, and I found myself fairly aligned with her perspectives and reasoning. I’ve given all of this a fair bit of thought in recent years, as I’ve met, learned from, and come to at times admire some people practicing various forms of non-monogamous relationships, but I’ve yet to really experiment with it myself. She recommended the audio book Polysecure to further my curiosity, so I started listening this past week (through the brilliant, free Hoopla app and my local library!). The first section of the book focuses on the broader concepts of attachment theory, with little about how it specifically applies to non-monogamous relationships, but I’m still finding it valuable already. I had a basic attachment theory understanding, but I’m appreciating getting some more depth there. Definitely looking forward to the next sections though, so stay tuned for my thoughts on that when I get there…

My cousin just got married!

He had a very small ceremony, and the real celebration was a party the next day in his back yard. He asked me rather off-the-cuff if I wanted to make some cocktails, and I was excited to have something to contribute! I spent a few days experimenting with some original recipes based on a few questions and exchanges on flavor ideas with him and his wife, and I decided I wanted to try to combine aspects of both their cultural heritage, Jewish on my cousin’s side, and Mexican on his wife’s. So I ended up settling on something sangria-like with pomegranate and cinnamon (both flavors commonly used in each culture), and a grapefruit and green chile + punch of a sort with Mexican rum and Israeli etrog brandy. Also I made 'em real pretty-like. 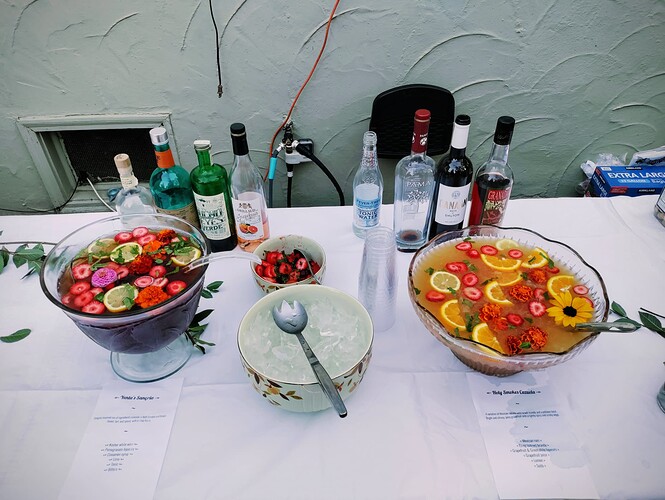 The sangria-ish option was lower-ABV and ended up being slightly more popular, but they were both polished off by the end of the night, and I got a lot of great feedback from both families! So I’m proud of how it came out and of being able to contribute something nice to their celebration.

It was also the first time many of my own family members had actually tried a cocktail of mine! My mom doesn’t drink much at all, and even she tried them. I wish I were British so I could sound less ridiculous when I say this, but I’m dead chuffed by the results!

I like to think I’m a good friend and make effort to be so as often as I can. But there are some friendships that are more difficult to make time for, for various reasons. Yet these are (usually) people I still genuinely care about and am interested in, and often like to spend time with. I think some of this goes back to various childhood and adolescent wounds that inform my relationships today as an adult, and one of the things I’ve particularly struggled with in certain relationships is the feeling of someone wanting my attention, perhaps even (seemingly) desperately at times. Or at least persistently. More objectively speaking quite often these people are behaving totally normally and just reaching out in a friendly way, or they may have different expectations or communications styles around friendship. But to me it can feel like I’m being smothered. This is a classic Pursuer-Distancer dynamic, something I became more overtly aware of some years ago in therapy.

Anyway, one strategy for dealing with this is just to exercise a bit of will and discipline and try “leaning in”, i.e. try to take a little of the pursuer role. And by gosh, sometimes it actually works quite well! It can not only make me feel less like the one being pursued, but it also seems to actually lesson the real incidence of the person “reaching out” (presumably and very naturally because their desire for contacting is being met more proactively). And it is ultimately a potentially healthier balance, a reasonable goal for a normal, enjoyable friendship. Leaning in a bit this past week with two friends gained me some connection that I really enjoyed in both cases, and it was a good reminder to continue experimenting with this strategy. It doesn’t always work, and not all friendships (or relationships of any kind) are or can be healthy, and sometimes there really is one person in the relationship who is desperate, and unhealthily seeking the attention of the other. But it’s important to try to see and evaluate that objectively to whatever degree we can, and give the benefit of the doubt, at least for a while. And when all else fails, to choose honesty and forthrightness, and simply tell our friend that the relationship is putting stress on us. A relationship with a foundation of real, mutual value will usually be able to weather that and find a better balance.

I’ve made do with a basic Vizio sound bar (but at least 5.1) for years now, but it finally gave up the ghost a few months ago. Shortly after that I experienced a pretty amazing stereo at an AirBnB, and got kind of excited about the idea of getting a better audio setup. As luck would have it a Woot deal came along this week for a Klipsch “reference” 5.1 channel system, and I picked up a decent used amplifier on eBay for just under $200 as well. It’s not the fanciest system by any means, but a solid step up from what I had (which was broken anyway, remember?

), and I’m hoping I can finally tune the center/dialog levels the way I want them. Also maybe music will be awesome? I don’t have a huge space, so there are limits to what I can do, but I’m excited about the possibilities in the short term and, especially, in the long-term (i.e. bigger house and listening space).

Speaking of music, I’m still working on that playlist for a friend that I mentioned a few weeks ago, but now I’ve got 2-3 people in mind. I think I’ll be making 2 playlists, one of which can be shared with two people. Anyway, I do need to try to curb the impulse to go through all my music and pick out things I want them to hear. There are already 20-30 good-to-great songs I can share, and it’s probably better to send a solid but manageable list than the “all time greatest definitive one”, right? Right. My perfectionism often doesn’t serve me. :-p Sharing music with people is such a great thing though! Heck, maybe I’ll even share a list here.

I finally decided on some wall prints and ordered them. They arrived this week, faster than I expected. Two unfortunate things happened that dampened my enthusiasm a little. First, I realized upon a second look at one of the photos after I had submitted it for printing that, although I had spent a decent amount of time editing it already, there were actually some notable adjustments to make that resulted in a significantly nicer image. Sadly it was too late to change the print order. And the resulting print (of the previous edit) does look nice! There’s just the knowledge lurking in the back of my mind that it could have been even better. That said I have a tendency to edit almost forever (see perfectionism above), and one has to make the call at some point, and I’m ultimately glad I did.

The other print ended up having a small dent in it, apparently from damage during shipping. It’s minor enough that I could probably live with it as decoration somewhere in my house that I care less about (like my bedroom, where I don’t spend a ton of time), but the printer doesn’t offer refund or credit, they just replaced it. So now I have two of the same 20x30" metal print, one of which has a little dent in it. No idea what to do with the damaged one, seems kind of wasteful. Oh well.

I’ve been experimenting the last 6 months or so with some “volunteering” of my tech consulting, along with some work-trade, and other arrangements of payment and alternative compensation for time/services/expertise. I get a lot of satisfaction out of helping people whose work I appreciate, and I’m often happy to do that for free, but sometimes it requires more time/effort/involvement than I feel comfortable offering for free (and navigating that feeling is also part of this whole process!). Anyway, this past week I had a lovely dinner with one of the people I’ve been working with, and it was a nice step forward on this experimental journey of how to provide mutual value to each other based on our strengths, the things that come easier to us, and that we enjoy doing, giving, and sharing.

I’ve been debating getting pet insurance for ages now. I finally signed-up with Lemonade based on expected cost of a basic vet checkup for my cat Sam, along with needed vaccinations, etc. and even a dental cleaning I’m fairly sure she needs. Insurance should cover most of that, and although it doesn’t pay for the cost over the year, it does make the ~$60/mo I’m paying fee a good deal more palatable. With most insurance (car, house, etc.) I get zero value in most years, and even with medical insurance I pay an insane amount only to have modest reduction in my bills and still crazy-high medication prices.

My cousin grew up with someone who became one of his best friends, but I never really got to know him myself. At the wedding party I mentioned above, he happened to be there all the way from New York, and we realized we have a ton of things in common, and some very similar views on and beliefs about the world, human psychology and flourishing, etc. I’m a bit sad I didn’t get to know him sooner, but at least now we’re connected.