Well, as you can see, I got within spitting distance of Inbox Zero. Wow. And I could have hit it if I wanted to; the fact I didn’t bother feels kinda good. Like the “zero” wasn’t the point (and it shouldn’t have been, of course). So, hooray! And now the practice continues.

One of the more well-known and respected folks in the Tools for Thought, UI/UX, and tool research space Andy Matuschak (if you use “sliding panes” you know his work) held a short-notice “unconference” this past week and while I wanted to attend for longer, I had a schedule conflict. But I did manage to join for one session by the author of a really cool little embeddable script called “Nutshell” that basically lets you create collapsible explanations, and even quotes of any website (including yours, of course) that supports it. I’m not encapsulating it that well, but I found it a surprisingly compelling idea, and perhaps more notably, the little design touches and thoughtfulness of the tool itself really stood out to me. Check it out!

A couple dear friends of mine are getting married, and they asked me to put together some custom cocktail recipes for them based on a few flavor profiles they were excited about. I love this kind of thing! They gave me “Rosemary and Plum” and “Smoke and Sage”, and so I’ve been iterating on those the past week or so, and I think I have some pretty good recipes coming together. Now I just need to figure out how the venue will scale it up and serve it. I’ve made bigger batches myself before (usually with a bit of trail and error as things can get a bit off in the embiggening process), but I’ve never given someone else a recipe to replicate and scale! So it’s a definite learning process. There may also be some ingredient sourcing constraints, etc. I basically have to be totally hands-off here for food safety certification and liquor license reasons, so where normally I’d just go to a retail shop and buy what I needed, here I have to make sure their distributors carry everything. So far they haven’t said no, they can even get the Russian Caravan tea I want to use… so far, so good!

I raised what I thought would be my last caterpillars of the season into pupae a few months ago, feeling happy to get my kitchen table back for other purposes.

But lately I’ve been seeing a few new ones out there, and it’s quite late season, the fennel around here is going to seed, and being more and more cut down by the neighbors… So when I saw a little anise swallowtail caterpillar on some scrubby fennel sticking into the sidewalk down my street, I decided I need to take this one home and make sure it gets to pupate. And I’m glad I did as I’ve since seen several other fennel stands cut down that I know had some small caterpillars on them.

But I’ve got this one safe and sound on my desk… Here’s what they looked like when I first picked them up.

(doing my best to gender the wildlife less 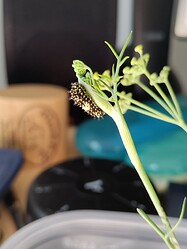 I’m finally making some progress on a sort of dating backlog, at least in a functional sense. To be clear, no new dates, no major prospects still. But at least I am going through all the people who have already Liked me in various apps, which are of course the likely most promising candidates for a match and subsequent date. I’m also working on reaching out to more potential matches, writing more intros rather than just Liking people (even though a messageless-Like is the norm for women, it seems…). Anyway, hopefully it will pay off. And if not, hey, it feels good to clear out the Likes and the open tabs I had anyway.

I finished listening to Jessica Fern’s “Polysecure” audio book (lent for free through Hoopla, check it out!). I really want to write some notes on it, and wish I had done more of that while listening through it over the past couple of weeks. But I can as a non-poly person (but someone who has interest in how it works and how it might work for me), I can say it was definitely interesting and useful. Perhaps most of all I appreciate the thought that is going in to challenging old assumptions, not just for “freedom” or “rebellion” (not to say that’s how I’d characterize poly in general), but in this case most especially with an increased awareness of things like attachment needs (and how to get them met), mutual and continuous consent and communication, etc. Much of what the book explains would apply as well to monogamous relationships with a little adaptation.

I’ve been using Otter.ai to record voice notes and get transcripts for a couple of years now, on a free plan because I didn’t need any of the more advanced features and their allotment of free minutes was fairly generous (600m/mo I think). But recent changes in their free plan - which are ultimately understandable - have given me enough reason to start looking at alternatives. Unfortunately since breaking my Pixel 3a’s screen many months ago, I have been on a non-Google phone and so don’t have access to their own Recorder app which does real-time (on-device!) transcription, so the free options for this kind of thing are fairly limited. But at least I knew I wanted to export all my content from Otter, which I did with the help of a 14 day free trial of their Business plan that includes bulk export… Unfortunately, while the bulk export works fine, it turns out that the recording date for the files that is shown clearly in the Otter interface is lost once you download the file. My recording dates are quite important, and while I can reference them in the transcript text files (doc or PDF only), it’s just a lot less convenient than if the actual file creation dates correctly showed when the audio was recorded. This is a thing that’s totally possible to do, send me an archive of all my files with the dates that show up in the File Manager after extraction being the dates of recording. But so far they don’t support it…

The endless rabbit hole of financial maneuvering to try to determine the optimal way to propose a Bay Area house investment to my family continues. It’s amazing how many twists and turns there are. I suppose it makes sense though that if what I have been wanting to do was actually as beneficial and seemingly straightforward as I have at times thought, then it would be a lot more widespread (and thus likely a lot more highly taxed). I keep thinking I’m at the end of the consideration and have finally figured out the way to approach it, but there are yet more wrinkles this week. In the end I suspect it will turn out to be less seemingly magical in its financial benefits, but still hopefully a good investment, and thus something I can get agreement on to move forward with. In this market it’s the only way I’ll come close to affording a house in the next 5+ years…

I haven’t done much traveling this year, less even than last year so far, I think (although much of my travel was in fall of last year). So I’ve returned to thinking about doing some kind of longer road trip, 2 weeks perhaps. Currently it’s between heading out to Colorado via Utah and checking out the Rockies some more (possible late season wildflowers or fall colors, depending), or going up the West Coast-ish into Washington for some prominent peak exploration. I had been leaning toward Colorado, but more recently I’m thinking northward might be good since I’d have the chance to visit more people I know. I did make it up to Oregon last year and saw most of those same people, but once a year is less than I’d like, really. The only trick is to figure out pet sitting for my cat Sam! Anyone want to come cat sit for 7-10 days? I’ll pay you!

A large truck foolishly drove down our little one-way street and knocked out our over-the-street fiber internet cable, taking me mostly offline for about 24hrs. As a “very online guy” that was unusual. But I’ll admit I did tether through my phone a decent amount of the time. That meant being exclusively on my laptop, which is basically what I do when I travel anyway, but it was still odd to be home yet not able to really use my main computer. I could say something about our modern dependence on technology, yadda, yadda. And it’s true I need more off-computer time. Sometimes random forced time away is good, but often not so much. I can plan good time away, and then it’s a lot better, like going camping! Here’s our fiber line after the truck passed. 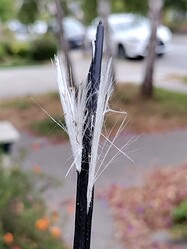 My long-time friend and more recent neighbor asked me if I’d be interested in being mutual accountability supports for each other, and check-in once a week to see how we’re doing on things. I’ve been needing to do something like this for a long time, but admittedly rather resistant. I don’t think I’ve been entirely against the idea, more that the resistance just made me not even bother to think much about it or look into it, so it never happened. But if I’d just given it a little more thought I might have realized that who you do it with can have a great impact on how it feels, and fortunately my neighbor Michael is someone who I feel very comfortable doing this with! He’s very low key, committed to personal growth but not obsessive, flawed and imperfect just like me (and of course all of us), and self-aware, and that’s a pretty perfect recipe for me to not really think twice about jumping into this. I’ll report back how it goes!

I am this close to properly beginning my migration of my entire PKM and task/project management into Fibery, which I’ve been planning in more and more depth over the past few weeks. As I’ve done so, for the most part my interest in and commitment to it has only strengthened. I continue to see more and more ways this will work better and just makes sense. I did end up testing a newer app called Capacities, more aimed at the personal knowledge and task management, and I liked it quite a bit, I think they’re doing a lot of great things that most of the big players aren’t yet getting right (their block editor is already way better than Notion’s in many respects, for example). But in the end it’s not mature enough to do everything I want to do, and meanwhile Fibery does support full markdown + CSV export, so I have some reasonable exit strategy if I need to migrate to another tool at some point (well, not if but when). Anyway, I’m hoping to start the migration soon, just figuring out exactly where to start. With my Obsidian notes? My Amazing Marvin task list?..