It’s been a great week for tasty things! First I stopped by Orchard City Kitchen in San Jose on my way home from Fresno, where I enjoyed some inventive food and drink, as always. Then I picked up some epic Bad Walter’s Ice Cream and the coveted Basuku cheesecake (Horchata and hojicha flavors!). But the best thing I ate this week was everything that was not pizza at “pizza restaurant” Sister Oakland on Grand Ave. Especially the Kanpachi Crudo with Salmarejo, absolutely the best thing I’ve tasted recently (pictured below). 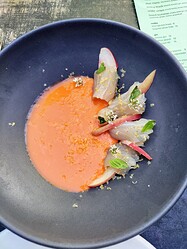 I have to admit, I kind of enjoy seeing pictures of myself. I don’t think I’m a narcissist (you’d tell me if you thought I was… right?), but still, I almost always want to see a pic of me that someone took. Sometimes they’re terrible, of course. But… no less interesting. In part I think this stems from my enjoyment of nostalgia and marveling at the changes we all go through in life (I like to think I’ve aged well, or at the least I’m thinner than I was 10 or 15 years ago

). But it’s also useful to have good photos of yourself for many reasons these days, online identity, dating, etc. So I’ve found the Google Photos feature that lets you auto-add new photos of people to a shared album to be really enjoyable, and I finally got my mom to share her album of me recently. Suddenly I have a ton more photos of myself! Some are even decent. And all are interesting memories.

I did a work-trade a while ago where I got my part of the bargain, but they never took me up on providing my half of the rrade! As someone who is not a monster, I have felt a bit weighed-down by this at times in the ensuing months. But I also haven’t done the best job of reaching out and prodding them to see if I can take care of my debt. Just recently I finally reconnected, and all is well! And it looks like I might soon be able to dig into a bit of web work for these kind folks. So it’ll all work out in the end. Hooray for work-trade!

I got my cat Sam fairly early in the pandemic (mid-2020), and finding a vet that was taking on new patients turned out to be quite tough. So I ended up putting it off until now, and even then, 2 years later, it still took over a month to get an appointment. But we finally had that first exam this week, and mostly things are good. However unfortunately she may need some dental work, which is apparently fairly expensive ($2500!?). So we’ll see how that goes… But I’m still glad to have her checked out and know she is otherwise healthy and normal.

I’ve been doing IFS-based therapy for probably a year now, after seeking out this modality in the hopes of taking a next step in my therapy and overall mental health journey. So far I’m finding it useful, though not obviously much more effective in the way I might have hoped. But I do feel like I could be doing more to engage in the process, especially in-between sessions. So I just started experimenting this week with doing “therapy sessions” on myself. Basically a dedicated time set aside for me to get in touch with my various parts and see what I can learn and accomplish in dialog with them. As it turns out this took the form of a literal, out loud conversation with myself in this case. And this is actually something I’ve done, with noticeable benefit, for much of my life. I can remember doing it even back to some parts of childhood, I think, or at least early teenage-hood. And it proved to be interesting and insightful here as well. I think it will be a valuable practice to continue, even just 15-30 mins one or tow days a week of dedicated time. And I’ll record the conversations in case I want to have a record somewhere down the line… If you’ve done IFS therapy I’d love to know what your experience is working on yourself within that modality!

I’ve had ambitions to create a cocktail-oriented YouTube channel for quite a while now. But so far it hasn’t come together, which is to say I haven’t dedicated the time and attention to it that it needs to get off the ground. But I think there is something else, too: my vision for it has perhaps not felt quite clear or congruent enough yet. I have lots of ideas for content, but as far as branding and describing my channel, its content, and its purpose, I had been thinking I’d stand out by being oriented “toward the needs of the home bartender”. The problem is that in one way or another most of the YT cocktail channels are doing that. So at the least I wasn’t articulating my real differentiators yet. But I think I’m finally starting to focus in on it. Some of the core elements that have been there since the beginning are experimentation, efficiency, and pragmatism. I want to focus on making it easier for home bartenders to create great drinks and have fun doing it.

But I also realized a perhaps critical element: I believe that my own home bartending experience will be enriched by creating this content, and that is a big part of why I want to do it! In other words it’s my hope and expectation that starting a YouTube channel will actually motivate me and give me a reason to try new things, more formally test and document ideas and experiments, and share the results. And it will hopefully help me create and be part of a community of people who are like-minded in how they approach cocktails: non-dogmatically, experimentally, improvisationally, and playfully. I want the content creation process and practice itself to be inspirational, and motivate me to do things I’ve always wanted to do! And I think that’s a much different framing than what I’d had in mind previously, as sort of a seasoned home bartending expert, presenting hard-won lessons from 10 years of prior experimentation. Yes, there will be some of that, but also and more importantly, I will be trying and learning new things, with the audience. I hope that’s a more interesting take.

I’m also still looking for a good/better name. Currently working with “Home Bar Heroes”, which I like in general, but there is a bit of competition. There is competition for many names/brands out there, and many existing channels don’t seem that concerned about not using an existing name/brand, at least to some degree. But I’d still like to start out on the right foot as much as possible, so if you have a better idea for a name for the channel, let me know!

I continue to experiment with trying to focus on one (or, well, more) projects on my Saturdays. So far I’m finding it helpful to make progress on things, but either I got lucky the first couple times I did it, or it genuinely is helpful to have one project to focus on. In more recent tests I’ve had a short list of multiple things I want to accomplish or make progress on, and whether it’s coincidence or it really is less effective in general, I certainly feel I’ve gotten less done on any one particular thing when there’s more than one “focus”. Still, I have made solid progress in at least two areas every time I’ve tried this, and that’s great! Many things have gotten done as a result that might still be languishing in my to-do list.

Quite a few years ago I started a project to scan a bunch of old photos from my high school (photos that students and staff of the school itself had taken, not my own photos from that time). I posted them in batches on Facebook, and it was quite popular among the alumni at the time. My high school had a fascinating 40+ year history and a lot of photos over the years, so it was really an enjoyable project. But after a while I ran out of easy-to-scan photos (many remaining were odd shapes, or oversized, etc.) and I stopped. It turned out, though, that there were many more photos I just hadn’t gotten yet, not to mention many photos, yearbooks, and other things from other students who were interested to share. But I just kind of set the project aside. That was about 8 years ago now, and I hadn’t realized just how long it had been until I picked it up again recently! But I have a whole new batch of photos to scan, and am already back in touch with various alumni to get what they have and share it. It’s exciting to return to this, I remember it making a lot of people happy and bringing up some really great memories for people.

Before the pandemic I used to go to quite a few concerts. And I have even been to 1-2 since then, fully masked-up of course.

One of the best and most consistent live shows I had seen in recent years was Nathaniel Rateliff and the Night Sweats, so when they had a show at the Greek Theatre, a great outdoor local venue, I grabbed a ticket. This was months ago, and I was assuming the pandemic would be “over” by now. Well, it’s sort of over maybe kind of in a sense. But perhaps more than that, I’m just not used to gearing up for the parking hunt, waiting in line, and jostling for position and a view of the stage that I used to endure on the regular. There’s something about being out of the habit of that which makes it feel more daunting. So when the night of the show came along this past Saturday, I just decided not to go. It hadn’t sold out and there were a bunch of tickets at below cost on Craig’s List, I couldn’t even give mine away for free. But oh well, at least the artists hopefully got some money. I’ve seen them twice before, so it’s not a massive loss. But I do wonder when I’ll feel like going back to concerts again. I know one thing, for now, no buying tickets in advance. I’ll get a last minute ticket the night of a show if I really want to go. That seems a better strategy now with the ongoing uncertainty of things… And you, if you haven’t already heard some Nathaniel Rateliff, check 'em out! Also Bahamas, the opening act, is pretty great IMO.

I’m now down below twenty emails in my Inbox, total. That’s kind of crazy to me. Though it’s at least as crazy that I had so many in there for so long. When I finally got to dealing with most of them over the past few weeks it unsurprisingly turned out that most were quick to address. Some I replied to, some I added resources from into my various info stores, some were links to things I read or watched, and some I just archived or deleted… Like so many things in life, it was largely a matter of just doing it, committing to and doing it… And since mostly cleaning it out, I’m managing to keep it fairly clean still, at least so far. Also, pssst, 10 of the emails in there right now are are just recommendations from OKCupid that I want to go through and haven’t made the time for.

So pretty soon I may well be down at 10 or less. Maybe even… Inbox Zero?

At least for a fleeting moment…

Enjoy it while it lasts!