As you can see

I made huge progress on cleaning up my Inbox this past week. It began in the prior week, but really gained steam here. The result is probably the cleanest inbox I’ve had in literally years. Which is kind of exciting. And yet… doesn’t feel all that different, at least not yet.

Of course the very nature of an email inbox is that it continues to receive things, to accumulate, so it is a never-ending process to keep it clean. It remains to be seen whether I’ll do a better job on that moving forward, but at least I’ve given myself a solid basis on which to do that. And if nothing else it does feel like “progress”, whatever that means…

When I first started this “digital garden”, I had high hopes for regular content output, since - in theory - there was no expectation of polish, quality, or even “completeness”. For a while that was true, but these days it’s mostly just a place for these weekly journal posts. This past week I was reminded of the original purpose and low-pressure context of this place, and felt some inspiration to just share simpler things, and try to do so more often. I actually write a lot of stuff for my own personal use, some (perhaps a lot?) of which might be easily adapted for publishing here, if I wasn’t trying to reach some “finished” product, but rather just sharing information, ideas, etc. Everything from product or service ideas, to philosophical musings, to simple notes and reviews on tea, spirits, or a restaurant I went to. I have to say I’m more excited by the former content in that list than the latter, but the latter is easier to put out with more consistency… So would you be interested in any of that? Let me know in the comments.

Fair warning: I think this part is mostly just a bit of venting. That said… do any of you all self-sabotage a bit in the dating realm? Yeah, me too. OK, I have no idea if any of you said yes, but… I do. I’m sure there is some interesting psychology there, in fact I’ve thought about it a fair bit, and I more or less think I know what’s going on (fear of rejection/failure being a strong factor, I imagine). But I’m pretty tired of no real traction for quite a while now. So wish me luck on doing something about that soon. I know what I should do, but as far as actually doing it…

But there’s something else I wanted to mention on the subject. I’ve been ambivalent for many years about the possibility of having kids, and this has also made me hesitant to date women who already have children. The problem is a lot of the potential matches and “Likes” I get these days are from women who do. I’m actually curious to try it out and explore what that experience might be like, but I also don’t expect people to be that open to that: to going on a date with someone who isn’t even sure they’d want to date you in principle based on known facts. My strategy most of the time has been to bias against these matches, but on occasion they seem so promising I’ve connected, and then done my best to communicate my interest but ambivalence, etc. So far I’ve yet to go on a date with any of these matches, much less meet any of their kids (a thing I totally understand many single moms will be hesitant and protective about, and it’s not something I’m rushing toward! just curious about). Anyway, complex feelings here. Something else that I realized about this in the past week is that my own mom was in this exact situation 40 years ago. So I’m not sure whether or how that might affect my own thinking, but dang, it was an interesting realization.

I adopted my cat Sam more than 2 years ago now but have yet to make an initial vet appointment for her.

In that first year a lot of the reason was the pandemic adoption surge that apparently made vets in this area extra busy, most of them not even taking new clients at all. After that discouragement it took me a little too long to get back to trying to book an appointment, but I finally got one this week! It’s a month away (that was the soonest; another was three months out), but it’s not too bad! Hopefully all is well with Sam, but it will be nice to be (more) sure of that. And maybe I can finally get her some flea + tick meds I don’t have to apply as an oily liquid that she rubs on the furniture.

I’ve been working on a “Spumoni Negroni” recipe for a while now, playing with different ingredients, infusions, and ratios off and on for a month or two. I think I finally got it pretty well dialed-in, with pistachio oil fat washed gin, cacao nib infused Campari, and Cherry Heering. It’s a pretty straightforward equal parts recipe. Details on that and the dessert version (that I secretly prefer) on my Instagram, but here’s the cocktail, simple but kinda pretty. 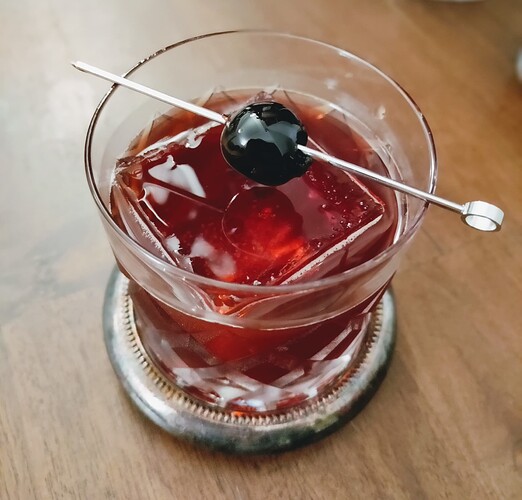 I have wondered for a long time whether I am a “super taster”. The more I learned about it in the last year or two, the more I suspected I wasn’t. For “true” super tasters it sounds pretty intense and at times unpleasant, actually. But then I learned that there are actual test strips you can buy, infused with some chemical that tastes like nothing to “regular” people, but quite bitter to “super tasters”. So I got some and tested (twice now) and… I’m a little bit of a taster I guess? It’s a little bitter, but not bad. Which honestly is probably where I’d want to be. I think it basically means I have a good sense of taste, but not an “extreme” one. I had a friend try it too, just to be sure it’s not that everyone tastes a mild bitterness, unfortunately he’s a smoker so it was no surprise he didn’t taste anything.

I have a friend coming over soon who I know will be interested to try, so I can’t wait to see how that goes.

Many years ago I had a very strange, painful experience with a friend. And for a while I thought I had “gotten past it”, but more recently I have come to accept I’m still recovering, still processing it. Some of the details of what transpired I haven’t thought about for a decade or more, but much of it is accessible in email. When this whole thing came up again recently in therapy, I decided to go digging around and see if I could find out a bit more, not sure at the time if it was a good thing to do so or not, but curious to try. And I did find what I was looking for. Still not sure if it’s helpful to dig back into this, but I do know it’s not entirely resolved, and it seems worth a try.

For the last month or so I’ve been experimenting with dedicating my Saturdays to a specific project focus, in the hopes of making more significant progress on a number of larger things that take concerted, contiguous effort to accomplish. So far it’s been largely a successful experiment. But this time I tried to make “good progress” on 4-5 things instead of just one and I think it was a bit less effective. Not too surprising as it does somewhat defy the original intent of the approach, which was the narrow focus and day-long commitment itself. That said I did start the work of seriously investigating and testing a potential/likely move of my entire PKM+tasks workflow from 4+ disparate tools into Fibery. More on that soon, hopefully!

An old, dear friend suggested we trade favorite “new” music this past week and for the first time in quite a while I am excitedly putting together a playlist. She and I have always had a particular connection around music, so it makes sense. And I’ve always wanted to be the kind of person who was really good at making playlists, I just… don’t think I really am (yet). But I’m excited about the opportunity to give it a shot again. Do you ever make playlists for friends, partners, or others in your life?