Looking back at this week now to post this journal entry, it strikes me as a bit different than many others. Perhaps in part because of the long holiday weekend, I’m not sure. But it seems sort of like I “accomplished” less or made less “progress”, or maybe just that the things that happened were less “notable”. As a result I feel less inclined to elaborate on the events of the week, which are drawn in sort of short form from my logs. Let’s see how this goes…

I’ve been working on decorating and otherwise improving my house for quite some time now. Progress is slow and intermittent, and it’s remarkable how long things can take, but it’s coming together, with a few more pieces falling into place this week. Hopefully I can post a progress photo one of these days (once there are prints on the walls!).

An old and very dear friend of mine has a 4th of July party every year at his parent’s place. He lives down in LA, but they’re in Sonoma County where I grew up. It’s always a great opportunity to reconnect with him and a few others that I have some particular connections to. Somehow this time was even more meaningful, though. I think in part it’s because I’ve had some notable experiences recently that are inclining me toward exploring a latent singing talent, and this group of friends were some of the first who encouraged me to pursue that some 30 years ago (

). It’s a bit sad it has taken me this long to decide to overcome self-consciousness around this, but better late than never and all that. And given the history here, I’m particularly eager to share whatever progress I may make with this small group of friends.

Under normal circumstances I drink alcohol frequently but not excessively (in my view, of course). I very seldom get truly drunk, and the last time I threw up from drinking was… well, years ago. This is definitely a good thing. Unfortunately I’m definitely a social drinker, so when I’m at parties it’s easier to get carried away. Newer and better non-alcoholic options that I’ve been learning about and experimenting with recently are definitely helpful here, but they’re still not my main focus. Over the 4th of July weekend I ended up sipping a lot of Scotch, which is unusual for me as more of a cocktail person, but it was a really delicious bottle (Ardbeg An Oa), and it just feels right when sitting around a campfire into the evening. This way of drinking makes it harder (certainly for me) to watch how much I’m drinking though, and maybe there’s something particular to Scotch as well that affects me more (a friend of mine swears this is true for him). Whatever it was, I had too much, threw up late in the night, and then again the next morning (after feeling a bit hungover but mostly OK for a few hours!). I don’t feel great about this, but I’m also glad it’s a rarity, and the occasional misstep helps reinforce the better habits that generally keep me from this, I think.

Dating has been kind of slow and frustrating of late. I’ve had a few OK conversations, a couple dates, but nothing that really “clicked”. One common thread for me is that app-based conversations are just generally tedious, with a few painfully rare exceptions. It doesn’t seem to depend that much on the person (perhaps more their attitude towards dating apps?), conversations are often slow, with intermittent replies, and not a lot of fun. Maybe the problem is partly me, too. It’s true I have a difficult time generating enthusiasm for short-form messaging in a tiny app window on my phone. That’s not really my style (which is one reason I have generally preferred OKCupid’s website to any other online dating option). Anyway, I finally got an interesting match this past week, and conversation has been a better than usual, but still… well, slow. I get it, we all have busy lives, etc., and part of me just wants to try to jump straight to an in-person meeting, but not everyone is up for that right away, so it can be a little bit of a tricky line to walk. Hopefully I can move it in that direction very soon though, otherwise I think this will just fade into ever-lengthening times between replies on both sides.

That’s pretty much it for this short-seeming week! I treated myself to a nice dinner on Friday (an unexpectedly nice pivot after last-minute change of plans with a friend), and I had another butterfly surprise me by emerging from an older chrysalis (sometimes they take months to emerge, or even multiple years!). Dinner was outside and the texture of the table was cool, so here are a couple photos of that for the heck of it. 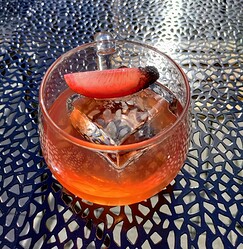 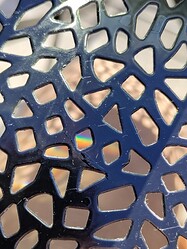 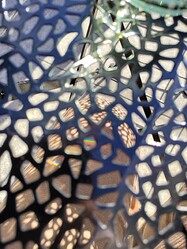