My main consulting gig is humming along nicely now. But I forgot that big companies often work on Net 30 (or longer), so I’m still waiting to get paid.

Still it has been very validating of my enjoyment of product-focused work, especially on early-stage projects, conceptual feedback, etc.

For many years I’ve had the idea that I might look my best at a particular weight, or rather, body fat ratio. Over the past decade or more I have found various ways to get closer to that target, but mostly of late I hover around 140lb. I feel reasonably healthy, but still want to know what I’d look (and feel) like being a bit more lean. So I made a plan a few months ago to try a more concerted period of effort to really get to that goal, by exercising more, fasting a bit more, eliminating desserts, and eating out minimally. I’m coming to the tail end of a 45 day period where I was supposed to be doing all that and, well, it did not go entirely as planned.

What actually ended up happening is I did reduce the regularity of my desserts (a habit I got more into during the pandemic, I think), and also did fast 3x/wk almost every week. But I didn’t exercise much more, and still ate out. I ended up getting down to 136 at my lowest (while maintaining or even growing muscle mass), which is really not bad, but I definitely didn’t hit my target. It was a valuable experiment, but I think ultimately it is just too much for me to try to stick to something like that for that period of time. So I want to try again, but this time being much more strict and for a much shorter period of time, perhaps 2-3 weeks. I think that’ll be easier to stick to, and will hopefully also show me whether I can actually get on a clear trajectory to get where I want to go in some reasonable time frame, or whether my weight floor will sit stubbornly above 135 and I should just give up and enjoy my relatively reasonable weight and body fat ratio without worrying about it too much.

To be clear, I’m not genuinely worrying about it now, or any time in the past 45 days, this is more of a genuine curiosity and I think a healthy experimental goal…

I went to two concerts up in Napa this past week, and ate dinner at two new-to-me places as well. My typical go-to is a place with good cocktails, but Napa being a wine town I found it hard to find many decent options. Angele Restaurant’s drinks turned out to be pretty mediocre, though the food was pretty good. Wilfred’s Lounge is a fun tiki spot right near the Oxbow River Stage (concert venue), and the drinks are pretty good (but massive), along with decent food, but due to aforementioned proximity it’s also especially busy on a Saturday evening before a show. I’d happily go back to Wilfred’s, not sure about Angela’s. Anyway, the shows were good, Brandi Carlile especially (she’s absolutely incredible live), and Norah Jones is great too. But at both shows I ended up sitting right next to, well… assholes, basically, outright self-entitled assholes. No other way to put it.

Both times it was a couple of people who for whatever reason just felt like talking through the entire concert. I or others around me fairly politely asked them to keep it down, and their response was to get self-righteous and belligerent. Sadly I can only conclude that this is the Napa crowd and I’m not sure I’ll be going back to that venue as a result (only half exaggerating).

It’s been a while since I finished my last audio book (Patriot Games maybe?), feeling a little uninspired by the remaining titles in my Audible library. But I got a recommendation recently for “After On”, by the author of a previous audio book I had reasonably enjoyed, so I used up some Google Play points (accumulated by taking surveys to tell Google even more about my life

) and picked it up. I’m a couple hours in and so far… I’m not so sure. It’s quirky, multiple voice actors, and a techie, startup-themed story, which could either be totally up my alley, or really miss the mark if it’s not well-portrayed. I feel like it’s not getting anything “wrong”, but it feels a little too try-hard so far, I guess. I’m sticking with it for now though, after all, John Hodgman does one of the voices and that’s what helped save the last book from the same author.

I’ve been slowly working my way through a rewatch of Arrested Development for several months, formerly one of my favorite shows. I think it’s pretty widely agreed that after it got “revived”, it was never the same, but since the re-edit on Netlifx of season 4 I was curious to see if it worked any better. And hey, it does, though it’s still a mediocre and problematic season (to be fair season 3 was getting problematic already, in certain ways). But I’ve just begun season 5 and actually so far I’m liking it more! It probably helps that they weren’t dealing with so much scheduling insanity this time around, so they could get all the actors in the same place most of the time, hah. Curious to see where this goes…

I went up to my favorite swimming area on the Yuba River this past week with a great little group of people. They rented this absolutely amazing AirBnB with in the middle of the forest with tall, echoey ceilings (perfect for dancing around and singing at the top of your lungs, which is exactly what I did the first night when everyone else went to dinner!), soaking tubs with views in both bathrooms, an herb garden, and a great kitchen. We had a communal Solstice dinner the 2nd night of the trip where everyone contributed something delicious. I hadn’t actually planned to do anything, but I did bring a small collection of cocktail ingredients and was able to whip up something fun for the 6 of us with the help of the herb garden (rosemary!). It was actually really fun to realize I could make a contribution and then pull something great together unplanned, just from what I had on hand. 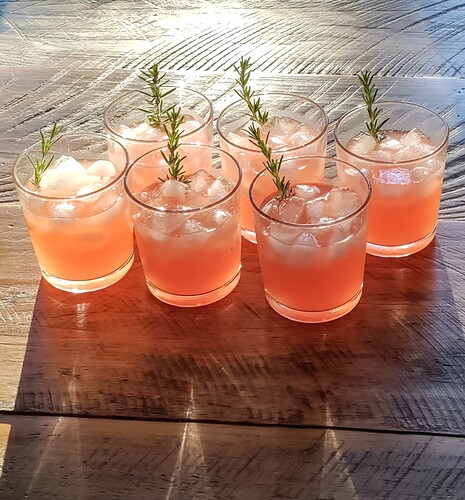 Also the light on our dinner table was pretty ideal.

I’ve been going to the Yuba for years, but there are still spots I haven’t explored. I checked out a new one this time around on one of my 3 river days, and it turned out to be a great find. One of the challenges of the Yuba is that it can be a little daunting to newcomers, with challenging parking, long and somewhat sketchy trails, and rocky swimming areas that aren’t super friendly to kids (or dogs). This new spot, Bridgeport, pretty much resolved all those issues, and had enough of interest for me as well, so it was a great discovery.

Meanwhile I had some interesting ups and downs in my own experience on the river that helped me better understand what I love about it, and what I need to really enjoy my time there to the fullest. I am actually pretty darn good at solo traveling, but I often miss having people with me just to enjoy the places I get to. The Yuba is one of those, but in particular there I really like to be a bit adventurous, exploring upstream, swimming under rocks, and the like, and it’s a little less enjoyable if I don’t have someone to share that specific aspect with. So that was interesting to really notice and think about how I might resolve it. I was really happy to be there with the group I went with, for some their first time on the Yuba, and adventuring up river or into the depths is not everyone’s thing. I think I just need to expand the group of people I go with to include another adventurous sort.

While out at the river, I managed to miss a scheduled therapy session. I had planned to get back to the AirBnB in time for it but just got lost in the moment I think. So I’m out the cost of the session, unfortunately, as it was fully my fault. That said it did feel like there were some notable aspects of river time that were therapeutic, so it sort of worked out in a way…

One of the challenges of traveling, and a reason I don’t go galivanting around more, is just that it’s often hard to stay productive. But on this trip to the Yuba I was actually able to balance it pretty darn well, I think. It helped that a good number of people there were also working during the day, so although I went out to the river 3 of the 4 days, in the mornings and evenings I could stay caught up, and I dedicated most of 1 full day to deeper work and catch up. It ended up being working out really nicely, and I’m hopeful I can do more in this way, keeping the balance while exploring and enjoying time away from home. Working while traveling is a whole area of skill and experience in itself, one I’d like to be better at since I do plan to travel and keep working, and want very much to do both (to the degree that both remain satisfying and meaningful). So finding the ways to make them work well together is key, and this felt like a nice step in that direction.