I think I’ve been a pretty good son, but it’s true that I’ve never made much of a big deal out of Mother’s Day. I call, or maybe visit when I can, but that’s mostly it. This year, with my mom much closer, and a serendipitous (and well-planned!) Pie + Flowers pop-up mini-market orchestrated by A Pie in the Sky, I was setup to celebrate my mom as much as she deserves.

I brought two different flavors of galette (strawberry rhubarb and mixed citrus), a beautiful and unique bouquet of flowers (thanks to new pop-up florist Mandalina Studio, and came prepared to do some handiwork that my mom had long been requesting help with. We had a sweet day together, made a big salad to share for lunch, and it was the best ever. At least I hope she thinks so.

The galettes were excellent by the way! 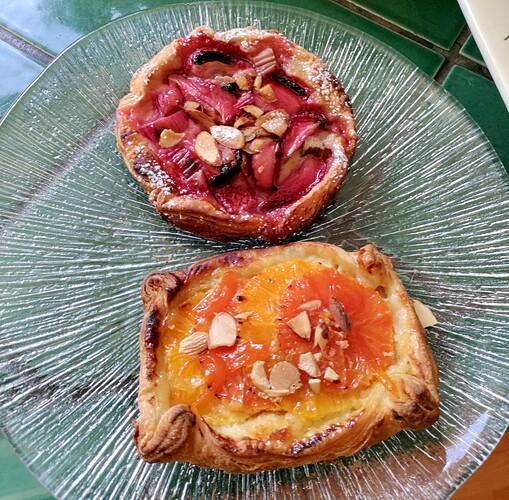 I’m one of those crazy weirdoes who actually reads lengthy legal contracts that are sent to me before consulting jobs and the like. This week as I prepared to get started on an exciting new job, I found a few things that raised some concerns for me in their contract, and it felt good to be able to push back a bit on these clauses that are probably standard, but still overly broad. I’m in a fortunate position where I don’t need this contract, so I can afford to be picky and advocate for what feels right. I don’t have genuine concern this company would actually do anything unreasonable, but the contract should still be more fair if you ask me. Also, amusingly, no less than 3 members of their legal team have been involved in the discussion so far. Curious to see what the ultimate response will be this coming week on the possibility for any modifications. I suspect they won’t budge, but it’s worth the push back.

This was my first full week of getting more serious about the possibility of buying a house. I’ve been watching the market for 2 years, but this was the first time I talked to an agent! She was a recommendation from a couple friends who bought last year, and so far I am very happy with the choice. Meanwhile I’ve been trying to find some real estate-specific accounting expertise, and finding it challenging and expensive to get answers to my questions. Not too surprising, accountants and attorneys are some of the most expensive services around, and it’s worth it as long as I can just get clarity on the best way forward. Unfortunately so far I’m not yet confident in that. But I’ll keep trying…

I have been exploring a new connection with the explicit frame of “demiromanticism” mutually in mind, and so far I’m finding it really rewarding and intriguing. The basic idea (which I hope to write more about soon) maps closely to “friends first”, but there are important differences from my past experiences with that which are arising more or less organically. It feels like I’m co-creating what this way of getting to know someone might be like, and that’s exciting. In a way it feels more open and full of potential than a normal dating context, even though the sort of baseline understanding is we’re “just friends”, there is a sense of mutual exploration and heightened communication that I think results in part from the conceptual frame itself. I’m excited to hopefully meet more people with the same understanding and see if it follows a similar or different trajectory!

I am one of those people who believes in the importance of good medical/health care, the value of doctors and expertise, etc., but I also have a hard time getting myself to actually get help with things when I might need it. Sure, I’ll go to the hospital if I get injured, I’m more talking about “Is this a problem?” type things, or preventive care. I haven’t had a regular checkup for several years, and that’s not just because of the pandemic. And meanwhile I’ve had several (possibly) little things crop up that I should probably get a professional opinion on. Everything from little skin discolorations that may or may not be growing, to oddly sensitive toes sometimes. Well, I finally booked a telehealth appointment with my new doctor (who I picked out a month or so ago specifically in the hopes that as a DO he would be a bit more “holistic” in his approach). The initial visit was short, but went well, I generally like his demeanor, and now I have some lab tests ordered and a follow-up visit to get checked-out in-person. Woohoo, adulting!

Pre-pandemic I had a great group of friends I would get-together with for trivia semi-regularly. We’d usually go to a food market or bar, and it became a tradition I really enjoyed. Then the pandemic hit and all that went away. We did some of it virtually for a while, but it of course wasn’t the same. Then we had a few mediocre-at-best attempts at a brewery in downtown Oakland, where the beer and food was good, but the trivia was most definitely an afterthought.

Well, this week we finally got to return to in-person, and this time indoors even, which I have to say I’m still a bit uncomfortable with. I was OK with it in part because it was a small place, fewer people, and they theoretically were checking vaccination status at the door. But then it turned out some of my group had met a new couple there and decided to team-up. They were nice people, but the guy was sitting right next time and coughed several times (into his sleeve) during the evening, and was talking with me at quite close quarters. If it had been someone I knew and trusted, I probably would have dismissed the coughing, having faith that they wouldn’t be there if they felt at all “off” or sick. But I didn’t know them, and didn’t really know how to ask or otherwise navigate it. So… I stayed and just tolerated it. I’m not really proud of that, but I’m also not sure the best thing I could have done.

It’s days later now and I just took a COVID test and I’m negative, plus no symptoms, so I think I’m in the clear. And I’m getting a booster literally tomorrow. But this won’t be the last time I have to navigate that kind of thing, and I want to get better at it. What would you have done?

Friendship under (re)construction! I have a long-time friend and our connection has been strained in various ways over the years, but it has also survived a lot. She has also been through a lot personally, too, especially lately, and I’ve wanted to be there for her, despite some discomforts on my side (largely, I now realize, relating to a combination of some historical wounds both between us and for me individually). Through the process of trying to be a good friend a lot of the unspoken difficulties between us surfaced, and it has actually been really good to finally get it out in the open, talk about, and work through it. It’s still in progress, but I’m finding a lot of value and personal insight in the process, and happier being able to be more authentically “there” for and with her, too.

One thing I was reminded of is I have a tendency to fall into a “distancer” role with certain kinds of people (well, those who are more “pursuers”, for one thing). And it turns out (I learned, in this audio book I just finished) that “leaning-in” as a distancer, i.e. doing the exact opposite of what you want to do, doing what you feel more uncomfortable about, can actually lead to reducing that discomfort and breaking out of the pursuer-distancer dynamic. Which is great for both people involved! So it’s great to learn more about myself, practice getting better at relating, and restore a valuable friendship all at the same time.

This is now my 2nd journal update in a row, and hopefully I am now getting back into the rhythm of it. I am at least finding it enjoyable to write, though the pressure of many other things on my plate still looms in the background (and was one of the big reasons I stopped in the first place). I’m slowly catching up on some things though, and finding others I can let go of…

I’m still on Facebook and some other mainstream social media (Instagram), but it turns out most of my friends aren’t. Some explicitly/publicly/obviously opted-out, others just don’t seem to be saying much. These days my feed is largely dominated by the various cute animal and joke meme groups I follow, with the occasional post from an actual friend. And I miss being able to keep up on people’s lives (and share my own) a bit there! It was never the greatest setup to do so, but it worked decently for a while, before people understandably got uncomfortable with “Meta” holding all this data and control of people’s attention.

My friend and neighbor Michael is one of those people who opted-out, but he also misses the good aspects of it. So we embarked recently on a collaborative research project to try to find some good alternative we can recommend to our friends and try to get everyone sharing together again. Unfortunately what we’ve found so far is that nothing is quite good or mature enough to probably be worth recommending wholeheartedly, at least not for anyone less techie.

Mastodon is reasonably good, but very Twitter-like, and my friends (and myself) never really gravitated much toward (or used) Twitter and that style of shorter interaction and updates. Diaspora is one of the most promising Facebook-like options, but there is no dedicated mobile app and hence limited push notifications, especially for iOS, which is something of a dealbreaker. Image/gallery support is also limited, and there is no events functionality as yet, all of which is non-ideal. Then there’s Friendica, which also seemed promising, but has its own share of rough edges that are different than Diaspora. Unfortunately I don’t feel like I can wholeheartedly recommend any of them yet. But I’ll be watching those latter two in particular and hoping to see some polish that will change that soon-ish…