Wow, it’s been a few weeks since I got one of these out (though by the time you read this I may have caught up and the older updates will be backdated to the correct place). Well, a lot has been going on! Some good, some bad. For now I’ll focus on this week and try to catch up on the rest…

As I mentioned a few months ago, I’ve been contemplating going bald of late. It’s easy just to keep doing the same thing, so here I am nearly 4 months later and I still haven’t done it.

But it seems more and more likely that I will, and it’s just a matter of deciding on it and then doing it. Stay tuned…

I’ve been working with some awesome people in my “non-profit tech consulting” efforts, but until recently some of that was entirely virtual. But what was virtual became IRL at last this past Sunday and we had an absolutely wonderful dinner together and hardly talked about “business” at all!

This is someone whose work I have admired mostly from afar for a number of years, so it feels especially exciting to work with her and help support her own success, as well as the positive things she is doing in her community. I have always felt she is a warm, deeply caring and empathic person, but that can only come across so much in text or even over video, and now I can certainly confirm she is all those things, and we had a really nice bonding moment over some difficult experiences we’ve both recently had.

I made the decision to leave one of my more demanding consulting gigs a while ago, but for various reasons the timing did not seem right to tell them until just this past week. But I was finally able to “put in my notice”, with about 3 weeks left before my contract will naturally end about 9 months after it started. It has had a lot of ups and downs and plenty of challenges, but I’ve learned a lot about working in startups, and about myself and what I really want, and I do feel I was able to do some good work ultimately. So I’m glad of the opportunity and of the journey it was!

One of the interesting paradoxes in working with my coach is that I often spend the weeks in-between our sessions finding and pursuing passions here and there (but without the deliberate engagement or structure that would likely push it forward more consistently), then we get in session and have trouble connecting with that same passion. We get all the structure and introspection, but sometimes the “fire” that often drives my most exciting work is hard to connect with. I don’t think this is a fundamental flaw in the coaching work, through the years I’ve been doing this, and in more recent IFS therapy work, it has felt more like the parts of me that connect most with that passion also have concerns with or distrust of structure, discipline, etc. But we did end up connecting with a good amount of that elusive enthusiasm and motivation in our last session and it was exciting to see. It’s clear that when I can really marry the spontaneous drive and enthusiasm to the structure and discipline, I’ll be able to do even more.

One of my ongoing goals is to work consciously to be a better friend, and as part of that I try to express direct appreciation to at least one of my friends each week. It doesn’t always happen as organically as I might have previously assumed, and it’s a good practice and reminder. So when a friend reached out this past week asking for some examples of things I appreciate about them (for some personal work they were doing), I felt like I’d been training for this for years.

It was a really sweet opportunity to express some things I perhaps hadn’t fully told her, and I’m glad it came up. Good friendships are too often taken for granted!

I started experimenting with a daily log template in Obsidian a little while ago, and so far it’s going great. I also have a semi-regular practice of simply noting my accomplishments, progress, etc. to help me really appreciate how well I’m (often) doing. But when I do this it’s mostly whatever comes to mind, which can be the most recent, or only most significant thing that happened. So I decided to try to do this more deliberately and at a smaller scale and added a prompt to my daily journal practice. It has been a week or so now and I’m really liking having it! It’s a lot easier to remember smaller but still notable accomplishments each day, and it gives me a reason to celebrate a little at the end of each day. I recommend!

My dating life has slowed down even more. I proposed a get-together with a couple of people over the last few weeks or so, and all of them basically fizzled out.

It’s hard not to be discouraged. But to be fair I wasn’t super excited by any of them! And the truth is that for the most part I just let opportunities come to me, so it’s no wonder they are few. I have known for a long time but really need to internalize that dating will probably not be more successful (at least in terms of raw numbers) until I put more time into it and take more initiative. Now just to make myself do it. Something about using most of the existing dating apps just feels tedious, pointless, and exhausting though. Can someone fix that?

Butterfly raising season started again a couple weeks ago, and I’ve been busy trying to capture more parts of their lifecycle in greater detail than ever before. It turns out though that there is too much going on at any one time to really capture it all, at least not with just 1 camera. So I’m now contemplating getting a second one, adding to my existing A7 III. The obvious first consideration is another Sony Full Frame option, maybe an A7 IV to take advantage of the improved autofocus and resolution (or even an RIV). But since a big part of my interest here is in macro and video work, I’m actually thinking about a Micro 4/3 option instead, like a Panasonic GH6 or OM-1. I’m still not entirely clear on whether there are true depth of field advantages for equivalent light gathering, in other words can I get more DoF at equivalent magnification but not then need more light to work effectively. It’s a surprisingly unclear topic, even when real-world examples are given. I might just have to get a good 4/3 setup and give it a try. If I do I’ll be sure to try to make some useful comparisons so I can perhaps contribute to clearing up this issue. And if you have any advice from personal experience please do let me know!

Since I’m not hanging around people much in general still, and even fewer of those I know are photographers, there are a sadly few number of more recent (and good) photos of me. I kind of hate selfies. But I realized mid-pandemic that I should actually be able to take better “selfies” with my A7 III and some kind of remote triggering (ultimately it was a cell phone app). So I experimented with that for a while, and after getting some decent results (some of my profile photos around the internet were done this way), I sort of stopped experimenting. But the reality is I still need more photos, it’s been at least a year, and most of what I took was just with one or two outfits and all indoors. I want outdoor! I want multiple outfits, other activities, etc.! Sure it’d be great if I had people to take some of these photos, but I’m not that comfortable posing for other people (or even myself), so it’d have to be something they did spontaneously, and somewhat without my knowledge, and that’s just not likely to happen at the moment. So I started up the “selfie” practice again. So far results are mediocre, but I’m learning as I go, and I hope to get better and better… 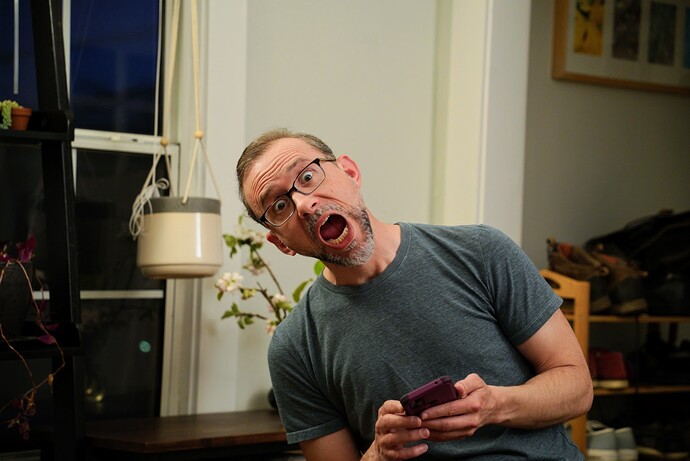 As I’ll note in prior updates, my grandmother (who we called “Ami”) passed away recently. This week was the funeral, and although no one looks forward to such a thing, I had some perhaps unique concerns that came up in a recent therapy session, around my grief being witnessed, around authenticity (or lack thereof) at funerals, etc. I think it’s in part because I’ve felt some discomfort at other recent funerals in similar ways. But I’m happy to say it all went better than I feared, and while some frustrations did arise around things like our culture’s relationship to grief and having to manage the feelings of others in a difficult time myself, I felt like I was able to stay in “Self” and simply observe and be with these things more often than not. I had also been concerned about my own mother and how she would be feeling having lost her mom, and she seemed to be doing well all things considered.

Before and after the funeral, looking at photos, and in some cases things I had never seen from before I was born, I also got in touch with and was able to share some valuable thoughts and emotions with others who were close with her. She was a remarkable, creative, clever, and mostly kind woman, and though due to Parkinson’s she was not always “all there” toward the end, there were still plenty of sweet, connecting moments, and she was happy and making beautiful art almost until the day she died. She passed in about the best way one can, I think, and I am grateful for that, and the time I had with her in recent years. These kinds of things can also often be opportunities to reflect on our relationships and even learn more about the people we knew, and there was certainly a good bit of that on this visit.