Over the past year or so I have delved further and further into how to host and manage a Discourse forum instance, and I now administrate 3 test forums and 2 production ones. I’ve come a long way! And it all more or less began with this digital garden (well, The Productivists was first, really, but my own journey began more here). Most recently I have begun experimenting with the Discourse team’s new, pre-alpha live chat plugin, and the potential is pretty exciting. Unfortunately none of my test setups are getting much activity.

So if you’re interested to see what Discourse chat is like, head on over to The Productivists and join the Power Users group to test it out!

I finished The Book of Boba Fett (aka The Mandalorian 2.5). It really felt like it squandered its potential. The first few episodes, despite being heavy on flashbacks, brought some interesting dimension to the Tusken Raiders, but after that they basically disappeared from the show. Even the last episode “twist” reveal had little impact. There were other missed opportunities too, like the fact that we never see any real bonding, much less training, with the Rancor. These might not even be the most glaring problems. The fact they tried to stuff so much non-Boba content in (Mando, Grogu, etc) really diluted Fett’s own journey, too. I don’t regret watching it, but it’s a bit of a bummer after decades of waiting for something awesome to be done with this awesome-seeming character (and even a glimpse of that in The Mandalorian last season!).

I’m negotiating a potential long-term work agreement, and we’ve been going back and forth with terms for a bit. They finally just accepted my last counter-offer, which should have me happy. But other events in the company meanwhile have me doubting my involvement entirely. I had hoped I could help them improve communication internally and externally, implement better tools to increase efficiency, and help guide more data-driven and consistent decision-making. But I think I’ve lost most of my hope for any of that at this point… They’re good people doing good work, I just don’t think they have the self-reflection (or perhaps the time and energy?) to see their own flaws and deal with the seemingly obvious incongruities in their approach.

Fortunately I am making great progress in my tech volunteering work, and finding it much more satisfying than either my real estate job, or my other consulting and working with startups. The people I’m working with right now are both essentially solo operators, both in the food industry (something that is also dear to me), and both doing what they can in their respective spheres to make the world a better place. I feel proud and happy to help them better enable their work! Plus it gives me an opportunity to experiment with new (or new-to-me) tech, build interesting, novel solutions, etc. It’s win-win, so far. And I hope to continue and expand this. If any other tech-savvy folks are interested in collaborating with me, some kind of loose “collective” perhaps, get in touch!

I’ve long enjoyed noticing random rainbows that seem to show up almost everywhere, and almost every day. I have also wondered whether other people see them as much as I do. Regardless, it became something I wanted to try to share with people, so I started taking photos of them. I shared a few on Instagram recently. Here are a few more from this past week, and perhaps I’ll keep adding more as the weeks go by. Where were the rainbows this week? Here they were: 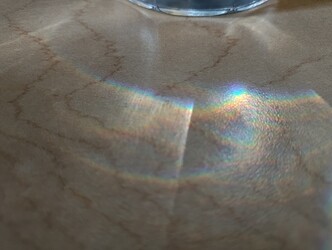 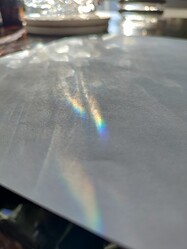 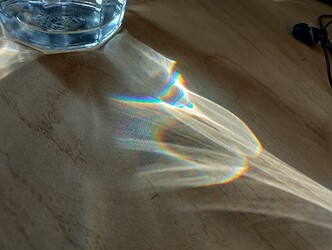 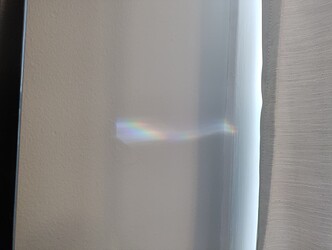 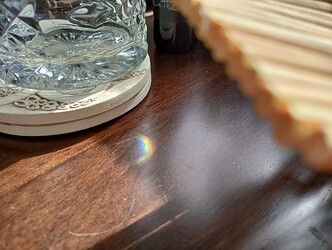 I started another audio book, “The Tastemakers” by David Sax. I’m listening to this primarily due to my interest in food, and although it’s not a brilliant book, it has enough nuggets of interesting information and history to keep me entertained, at least for its fairly short runtime. I’m really not sure I’d recommend it, in the same way I wouldn’t recommend some mindless comfort TV show I might watch. This is maybe a step above that, but not amazing listening. Sorry David.

I’ve been working on the final parts of my bar area overhaul for ages, as anyone who has read recent entries will know. I got a set of 4 hanging shelves some time ago and finally began installing them a couple weeks ago, but if you’ve worked with hanging shelves and wall anchors, you’ll know it can be a real hit and miss process. I’ve already had to patch the wall and repaint small areas twice. I have two shelves solidly in place, 1 is a little wobbly but maybe acceptable as-is, and one still to install. So far it’s hard to get up the motivation to do that last one, I think in part because it could go badly again, and also because the spacing is messed up now since I had to move it from the original holes (which didn’t work out). Sometimes these little imperfections can really throw off my feeling towards something.

I finally had a party! Well, four people came over. But after 2 years of no more than 2 people at a time in my space, it felt like a lot, and it felt great! The original foster of my kitty Sam was in attendance, and got to see Sam all happy and fluffy in her new home (the first time she’s seen her since I picked her up and took her home!). And her partner is a cocktail nerd like I am, so he and I had tons of fun tasting things, talking about the finer points of cocktail and ingredient making, etc. I made all the drinks, including a number of non-alcoholic ones for someone who wasn’t drinking that night, and I’m really pleased to say they all seemed to be a hit! Good feedback, here and there a few things that could be adjusted of course, but overall I think these latest recipes (and some I created on the spot) were quite well received. I’m proud of the non-alcoholic ones, too, it didn’t feel like they were “second best”, they seemed to be enjoyed in their own right. I hope to share some of those recipes soon, although the N/A drinks often rely on somewhat unique products like Thai basil shrub, or Douglas fir tea that may not be easy to get, depending on where you are…

Overall it feels like my life is moving forward nicely, and getting to a place where I feel like I’ll have more of what I want in it. My real estate work is getting smoothed out in some last remaining areas, some other work considerations are beginning to resolve (see above) and likely without ongoing obligation, and my recent discovery of volunteering my tech services is proving to be really fulfilling. I can see myself soon having a good balance of work and volunteering, hosting parties occasionally, and going out to explore things with people, and getting back to exploring food and drink on my own as well, and that sounds like a pretty good life. Travel still feels a little distant, but I intend to do some more road tripping in 2022, at the least. I’m not so sure about hopping on a plane for a while yet… But yeah, life is good, and getting gooder.